FB FOL President, L. Dee Kaufman was selected as the NEFLIN Library Champion of the Year 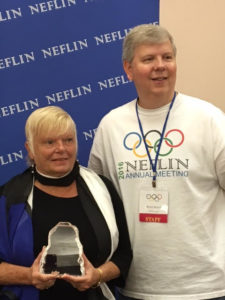 FB FOL President, L. Dee Kaufman was selected as the NEFLIN Library Champion of the Year! The award is given each year to one individual in North East FL who has shown exemplary support of libraries.  Dee was awarded for her tremendous contributions in support of the Fernandina Beach Branch Library for fundraising and advocacy.

Dee is dedicated to learning at all levels, and specializes in early literacy development.  She volunteers approximately 1,000 hours each year with the FB FOL and currently serves as its president.  When asked ‘why do you volunteer?’  Dee said I believe in giving back to the community.  I had a great career and remain passionate about education, literacy and building the capacity of the next generation.

Under Florida law, e-mail addresses are public record. If you do not want your e-mail address released in response to a public records request, do not send electronic mail to this entity. Instead, contact this office by phone or in writing.
X
X